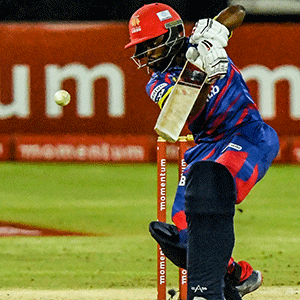 Cape Town – Temba Bavuma’s career-best century helped the Highveld Lions complete their highest successful One-Day Cup chase ever as they secured a much-needed eight-wicket win over the Titans in their Jukskei derby in Potchefstroom on Wednesday.

“It all came after the visitors appeared to have batted themselves into a winning position thanks to Dean Elgar’s lifetime best of 137, which saw him plunder six sixes and 10 fours in a 121-ball exhibition.”

There was also a highest List A score from Dean Elgar for the visitors, but that was upstaged by his Proteas team-mate with the hosts chasing down 310 with 18 deliveries to spare.

It all came after the visitors appeared to have batted themselves into a winning position thanks to Dean Elgar’s lifetime best of 137, which saw him plunder six sixes and 10 fours in a 121-ball exhibition.

Chris Morris did his best to entertain the fans of the North West with 51 not out from only 20 deliveries, a knock that included five maximums and three fours, while Heinrich Klaasen notched up a more measured 82 off 105 balls (8 fours, 1 six).

But that was not enough as the Lions went on to comfortably secure a first win after five matches of the campaign.

In fact, the Lions were on top for large parts of the game.

They began with a bang after winning the toss, bowling first and then reducing their old rivals to 38 for four in 11 overs.

Their stand, which surpassed the 195 between Elgar and Albie Morkel for the Titans against the Cape Cobras at Cape Town in 2014/15, took them to 240 for four with the former completing his sixth one-day ton with a score that beat his previous best of 131 unbeaten for Somerset against Sussex at Hove in 2017.

After three quick wickets, Morris provided a sensational final flourish to take the away side to 309 for seven.

However, the target was made to look vastly under par by the hosts.

Hendricks and Kagiso Rapulana (38) put on 96 for the opening wicket, before 89 followed by the former and captain Bavuma, who went on to complete his maiden franchise ton and third overall.

The Titans were never given a chance even after Hendricks went. Rassie van der Dussen’s 46 not out provided the support needed for the skipper to help the Lions win with three overs to spare.
article sourced from news 24